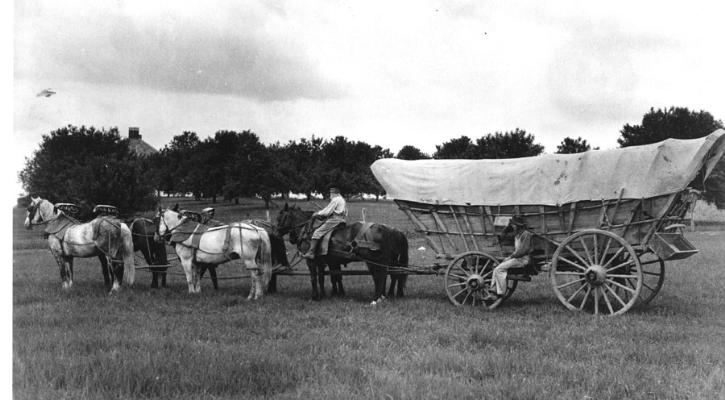 The next time we hear from Isaac is when he marries Harriet (Hattie) L. Parsons, reported as being on the 2nd. of August 1859 in Carson City, Territory of Utah (now Nevada). Isaac was by then 24 years old, while Hattie was only 15 years old. I have found no official record of their marriage – marriage certificate or register entry – but a marriage notice was published on page 3 in the Sacramento Bee newspaper on the 12th of August 1859. According to this notice the wedding took place on August 4th.

Who was Hattie Parsons?

She was born on the 2nd of December 1844 in Arkansas, although in some records her place of birth is given as Missouri. Her parents were Isham Parsons, born 1796 in Virginia, and Mathilda Evens born 1801, also in Virginia.

In 1855 the family sold up and set off for California with an ox team, when Harriet was 11 years old. She described the overland trip in her diary as follows:

“Father was well fixed and owned a lot of slaves. He heard about the gold rush in California, so he sold his store and, with his wife and children, started for California with an ox team. That was in 1855, when the Indians were so bad. Captain Sparks caught up with us and made us join his band of about 50 men, women and children. One night the Indians made a raid on our outfit, but just wanted beef. They had killed some people in the wagons ahead of us and a herd of cattle were killed. When we got there our outfit stopped and buried a lot of white people. I was only a little girl then, but can remember well our trip. We had some pleasures, but most of it was sad. We would stop at night and dance.
Water was so scarce, we nearly perished of thirst. We lost a lot of cattle and fine horses. It took us six months to make the trip. When we got to California we had lost almost everything we had. Father never lived very long after we got there.
Some men followed us to California stole two of father’s best horses. We stopped in Placerville and prospected with a pan, but we never found much. It was so misrepresented. We lived there awhile and then moved to Carson. Two women were killed and hung up in a tree. Father took them down and buried them.
Mother made her bed on a big rattlesnake. The next morning Father killed it.
We had a lovely home, raised almost everything – cattle, grain and all kinds of fruit and wild fowl.
A young girl died on our train and we stopped and had a funeral for her. We passed many graves and we just dug holes and put them in. This girl was traveling alone with her father but never lived to get to California. It was in the year of 1855.
I married when I was just a child to Isaac Gandy and lived in Carson, Nevada. I had four girls. I went from Carson to California several times, and lived in Sacramento, Placerville and Liberty and then came back to Carson. My husband took a band of fine horses to sell in Salt Lake City, Utah and then he sent for me. I lived there five years. He drove the Concord Stage from Salt Lake to Bingham and kept a livery stable.
We ran out of soda to make bread with and they stopped and gathered alkali to put in the bread. It made fine bread. We had 25 milk cows and had all the milk we could use on the trip. We milked every night.

Leonard Olds, a descendent of Luther Olds, of Centennial Colorado has recently (2014) published a fascinating volume with the above title. In the book he charts the travels of the Parsons family, between Charlotte Virginia in 1895 and Carson City Nevada in 1869. On the way they lived in Virginia, South Carolina, Illinois, Georgia, Arkansas and California. In his introduction Leonard writes:

“Ishan’s one outstanding characteristic of course was his tendency to relocate his family frequently.”

In 1853 Isham Parsons travelled to Placerville, California, with three daughters of marriagable age, including Harriet. “It didn’t take him long to realize that a mining camp was no place to raise young daughters, so he took them back to my (Leonard Olds) ggrandfather Luther Olds’ hotel i Carson Valley, Nevada. There Harriet married Isaac Gandy and her sisters married close friends of his.”

Harriet’s father Isham died in 1858 age 62 in Middletown, Placerville, El Dorado where he had a mine. Harriet’s brothers Lewis and George stayed in California, while the rest of the family moved to Carson Valley. In 1860 we find Lewis Parsons age 24 in El Dorado Co., CA. He was a miner. Youngest brother George Parsons was recorded in San Joaquin Co., CA. age 16 in 1860. He was living with his mother Mathilda Parsons, who apparently moved back there with her new husband Jesse Mount. Emma Catherine married  Tom Reese in Placerville abt 1855 while Mary Melvina married Luther Olds Jr in 1855. 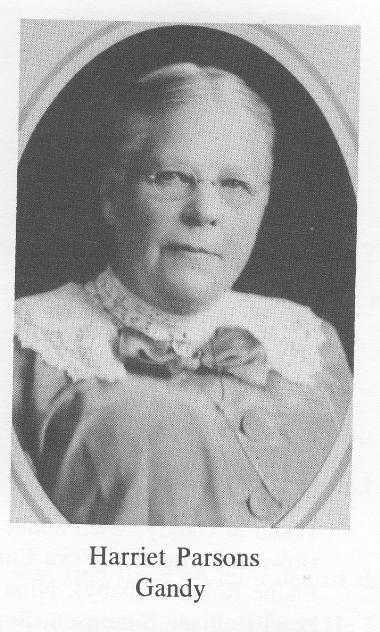