Descended from Piers and Adam Gandy in 16th Century England

The Gandy family has lived on the Northern banks of the River Mersey in South West Lancashire, England since at least the end of the 15th century. The oldest ancestor I have found is Piers Gandy, who died in 1550, and his son Adam Gandy, born in 1521. The Gandys lived in the parish of Prescot. Today this covers the towns and villages of Bold, Cronton, Farnworth, Penketh, Sankey and Widnes. Isaac and I are directly descended from Piers Gandy, his son Adam and Adam´s wife Ellen  – Isaac was the tenth generation, while I am the fourteenth.

Who was Isaac and where did he come from?

Isaac Gandy was born on the 31st May 1835 in Penketh, Prescot, Lancashire, England and christened at the Wesleyan Methodist Chapel in Bank Street, Warrington on the 17th of September 1835. His parents were William Gandy and Elizabeth Lawrinson (sometimes spellt  Laurenson or Lawrenson). They were married at St Elphin’s Parish Church, Warrington in 1818. William was the son of James and Sarah Gandy, Elizabeth  the daughter of James and Elizabeth Lawrinson.

From a previous marriage (Betty Woods, married 1815) William had two daughters, Mary born 1815 and Ellen born 1817. We believe Betty Gandy died, 1818-1819, but have so far found no record of her death or burial. William and Elizabeth brought up Mary and Ellen with their own, in all eleven children.

Where does the name Gandy come from?

If you look up the name Gandy you will probably find a reference to “Gandy dancing”. This has nothing to do with Isaac Gandy and family. Curious? Check out Gandy Dancing here.

A Poor Start to Life’s Journey

Isaac did not have a very good start. His father William died in 1840, age 47, followed shortly afterwards by his youngest son Henry (William died on the 27th of April 1840 and Henry, who was born in 1839, died on the 4th of June 1840). They were both buried in St Luke’s Churchyard, Farnworth. 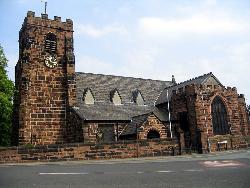 Isaac was thus left as the youngest child in the family, and fatherless, only five years old. However, most of his brothers and sisters had left home by 1841, when we find six year old Isaac living in Ash Cottage, Grey Stone Heath, Sankey, Warrington with his mother Elizabeth aged 40 (approximation, Elizabeth´s date of birth is either 1797 or 1794, making her 45 or 48 in 1841), who worked as a teacher, sister Elizabeth (age 10) and brothers Peter (age 14, a shoemaker’s apprentice) and James (eight).

Isaac’s mother Elizabeth died in 1845 aged 51, when Isaac was 10 years old, but by then he had already crossed the Atlantic to America! But here we are jumping on ahead in the story.

These bare bones of Isaac´s first few years in England contain three clues to the life of the Gandy family: they were cobblers and shoemakers, they originated from the hamlets of Penketh and Sankey between Warrington and Widnes on the north bank of the River Mersey and they were connected with the Methodist Church in Warrington.